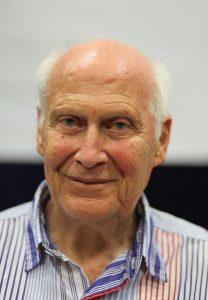 Anton Hellinger was born into a Catholic family in Germany in 1925. Hellinger states that his parents’ “particular form of [Catholic] faith provided the entire family with immunity against believing the distortions of National Socialism.” At age 10, he left his family to attend a Catholic monastery school run by the Order in which he was later ordained and that sent him to South Africa as a missionary.

The local Hitler Youth Organization tried without success to recruit the teenage Bert Hellinger. This resulted in his being classified as ‘Suspected of Being an Enemy of the People’. In 1942, Hellinger was conscripted into the regular German army. He saw combat on the Western front. In 1945, he was captured and imprisoned in an Allied P.O.W. camp in Belgium. After escaping from the P.O.W. camp, he made his way back to Germany. Hellinger entered a Catholic religious order, taking the religious name Suitbert, which is the source of his first name “Bert”. He studied philosophy and theology at the University of Würzburg en route to his ordination as a priest. In the early 1950s, he was dispatched to South Africa where he was assigned to be a missionary to the Zulus. There he continued his studies at the University of Pietermaritzburg and the University of South Africa where he received a B.A. and a University Education Diploma, which entitled him to teach at public high schools.

Hellinger lived in South Africa for 16 years. During these years he served as a parish priest, teacher and, finally, as headmaster of a large school for African students. He also had administrative responsibility for the entire diocesan district containing 150 schools. He became fluent in the Zulu language, participated in their rituals, and gained an appreciation for their distinct worldview.

His participation in a series of interracial, ecumenical trainings in group dynamics led by Anglican clergy in South Africa in the early 1960s laid the groundwork for his leaving the Catholic priesthood. The trainers worked from a phenomenological orientation. They were concerned with recognizing what is essential out of all the diversity present, without intention, without fear, without preconceptions, relying purely on what appears.[5] He was deeply impressed by the way their methods showed it was possible for opposites to become reconciled through mutual respect.

The beginning of his interest in phenomenology coincided with the unfolding dissolution of his vows to the priesthood. Hellinger tells how one of the trainers asked the group, “What is more important to you, your ideals or people? Which would you sacrifice for the other?” This was not merely a philosophical riddle to him. He was acutely sensitive to how the Nazi regime sacrificed human beings in service of ideals. He says, “In a sense, the question changed my life. A fundamental orientation toward people has shaped all my work since.”

After leaving the priesthood, he met his first wife, Herta, and was married, shortly after returning to Germany. He spent several years in the early 1970s in Vienna training in a classical course in psychoanalysis at the Wiener Arbeitskreis für Tiefenpsychologie (Viennese Association for Depth Psychology). He completed his training at the Münchner Arbeitsgemeinschaft für Psychoanalyse (Munich Psychoanalytic Training Institute) and was accepted as a practicing member of their professional association.

In 1973, he left Germany for a second time and traveled to the United States to be trained for 9 months by Arthur Janov. There were many important influences that shaped his approach. One of the most significant was Eric Berne and Transactional Analysis.

Nearing age 70, he had neither documented his insights and approach nor trained students to carry on his methods. He agreed for German psychiatrist Gunthard Weber to record and edit a series of workshop transcripts. Weber published the book himself in 1993 under the title Zweierlei Glück [Capricious Good Fortune; aka Second Chance]. During the next 15 years, he authored or co-authored 30 books.

Hellinger travelled widely, delivering lectures, workshops and training courses throughout Europe, the United States, Central and South America, Russia, China, and Japan. Hellinger alienated some potential colleagues and supporters by his idiosyncratic behaviour, such as making sweeping statements that reduced complex issues to single root causes or his manner of sometimes addressing clients in a caustic, authoritarian tone. Many practitioners distance themselves from the method’s founding figure. Many others continued their association, integrating the further developments into their own practices.

Bert Hellinger died September 2019. He left us with an amazing legacy which will carry on and benefit human kind for a long while.